When liposuction was first developed in the late 1970s, it took the cosmetic world by storm. There was no previous method to directly remove fat from a patient’s body. People began to flock to receive liposuction, and for good reason. However, the early techniques were unreliable and unsafe. They required that patients be put to sleep under general anesthesia, which put the patient at risk for complications and imperfect results.

Fortunately, liposuction techniques have advanced greatly since then, and Dr. David Amron has been at the forefront of liposuction technology, actually helping to develop newer and safer techniques. The most recent technique is known as pure tumescent liposuction. With a 100% safety rating and zero complications, allows patients to get the results they deserve while ensuring total safety.

The highly experienced liposuction expert Dr. David Amron gives his informative explanation of the Tumescent Liposuction Procedure. He goes a step further by explaining his techniques for obtaining the best Tumescent Lipo results. 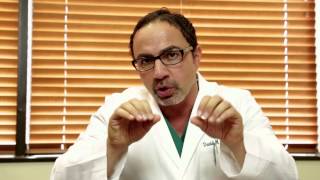 What is Pure Tumescent Liposuction?

What is Pure Tumescent Liposuction?

The word tumescent means swollen or firm. Pure tumescent anesthetic contains sterile saline solution, diluted lidocaine (a local anesthetic), and epinephrine, which is a drug that shrinks capillaries. As the first step of pure tumescent liposuction, Dr. Amron injects large volumes of this solution directly into the fatty tissue, causing it to become swollen and hard, or tumescent. Once the solution has fully soaked into the fatty tissue, he can begin surgery.

Another advantage to pure tumescent liposuction is patient positioning. Because patients are wide-awake, Dr. Amron can position them however he pleases to ensure no irregularities or indentations. This aspect of liposuction is simply not possible when a patient is fully unconscious.

When patients come to Dr. Amron for pure tumescent liposuction in his Los Angeles office, they get the expertise of a seasoned liposuction specialist. In the interest of providing you with the best results possible, he takes an active role in your successful treatment. Rather than mechanically performing any procedure asked of him, he conducts his own thorough examination to determine exactly what treatment will best suit your individual case.

With Dr. Amron’s pure tumescent liposuction, patients are assured the highest-quality minimally invasive liposuction Los Angeles has to offer. Not only is this procedure highly safe with barely any recovery, it is also effective. Dr. Amron is an artist and can help patients achieve the cosmetic results they deserve. If you have questions about liposuction or would like to set an appointment, please give us a call. You can also find out more about his other fat reduction procedures, such as the minimally invasive liposuction method called SmartLipo, and how he can utilize your own fat to perform a fat transfer.